HONOR launched its 15.6-inch notebook computer, the HONOR MagicBook 15. After this iterative update, HONOR has completed full coverage of 14 inch, 15.6 inch and 16.1 inch of mainstream sizes. In HONOR official store, it can be found that it uses AMD’s processor and graphics card. And its overall configuration is competitive among competitors at the same price.

This notebook has a super beautiful appearance. At least it is the unique in HONOR MagicBook. Its A side is cut with blue edges, which looks fashionable. The whole A side is surrounded by a circle of high bright blue edges. And HONOR’s logo is treated with two-color anodizing, which can reflect light blue. It’s highly recognizable. And the sense of technology is sufficient. Make side no longer monotonous. This kind of personalized design is consistent with the aesthetic of young people.

The HONOR MagicBook 15 is compact and light in a 15.6-inch notebook. The thickness is only 16.9 mm. Compared with a 14-inch notebook, it has advantages in thickness and volume. 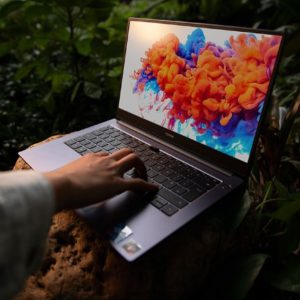 The HONOR MagicBook 15 continues its narrow border full screen design. The width of the upper, left and right borders is controlled at 5.3 mm. It looks like narrow strips. Notebook screens account for more than 87%. The HONOR MagicBook 15 has a screen resolution of 1920*1080. A screen ratio of 16: 9 and a widescreen with a visual angle of 178. With the three-sided ultra-narrow full screen design. It can bring a relatively good immersive visual experience. Anti-glare screens are useful whether used indoors or outdoors. When the indoor light is more complicated, the light reflection is effectively reduced. There is no need to worry that the screen reflection cannot be seen clearly.

Another design that satisfies users is the combination of fingerprint identification and power key. The system is started up and logged in to the system in one step. Eliminating the time and process of password input. The fingerprint of notebook computer, like the fingerprint of HONOR flagship mobile phone. It supports 360 unlock authentication and the function of self-study. The more you use it, the higher the degree of recognition.

It has an experience that other brands of notebooks cannot compare with. It can realize the intelligent connection between mobile phones and PC. This is no longer just a touch of each other. But a multi-screen collaboration function that has only been available since HONOR MagicBook 15.

This breaks the boundary between Windows and Android from the bottom of the system. The operation of mobile phones can be realized on the PC. For example, when replying on the mobile phone, the efficiency and accuracy are not high. Due to the size of the mobile phone’s virtual keyboard. Using HONOR MagicBook 15 to connect with the mobile phone. You can use the computer keyboard to enter. The ability to process all kinds of information has been further improved.

No matter for personal or office users, this computer with outstanding cost performance. No matter office or amusement, it can meet our requirements.

How to Choose an Internet Provider