To set on a voyage, all you need is a plan, a backpack and obviously your dream destination. Not to forget about a roadmap that is now made easier by the latest iPhone map. Apple now has upgraded the iPhone map feature along with some necessary corrections. It was not much ago when a lot of people blamed it for directing them into unfinished tunnels. As stated by the Iceland magazine, many unsuspecting travelers kind of faced this hassle. Most of the similar reported incidents took place at Ring Road joining the two towns of Húsavík and Akureyrilocated in North Iceland.

As soon as it came it the limelight, Apple took major notice and buckled up to fix this flaw. It has its major turn over from being an unreliable travel guide to a trustworthy one. The feature no more tells users to take the unfinished tunnel that is the source of all odds. One of the major component included in iPhone maps is its GPS equipment and map application. It soon marked the tunnel as a construction site and discontinued allowance of trippers to get stranded in the middle of a chaos. 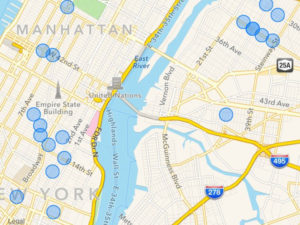 It was not long ago when Google got the backlash for a similar issue. Before its current update, Google misplaced the Ring Road far from its original location that is East Iceland. Nevertheless, some of the geographical features still have minor glitches in their position sending the tourists down the wrong way.

In case of a dilemma, always rely on the road signs. If you see any suspicious turbulence while locating a particular site in your iPhone map and the road signs, it is always recommended to go as per the road directions. The reason is that there may be a slight change or some uncalled construction happening that iPhone satellite has not taken into consideration. In that case, iPhone map will obviously do not show you the updated locale. Thus, it is better to go along the pathway directed by road signs.

It is better to use technology ut then you can never take it for granted. If it has a chance for modification, it is bound to make unprecedented errors.  Thus, trusting the iPhone app with closed eyes is not a very good idea in case of absolute doubt. If there is a road sign reading the way ahead is impassable, then it is indeed impassable. Thus, even if your iPhone GPS guide is assuring a clear way, you must trust your instincts and of course the signs.

Navigation systems are sure a thing that has made life easier than ever. However, the technical errors also call for the swift measures in the form of regular updates. Hence, keep your iPhone map guide updated and never get lost before reaching to your destination. Remember, safety is everything and technology is just a step towards it!

Explore The Best Of Joomla Templates: Know About 4 Best Software