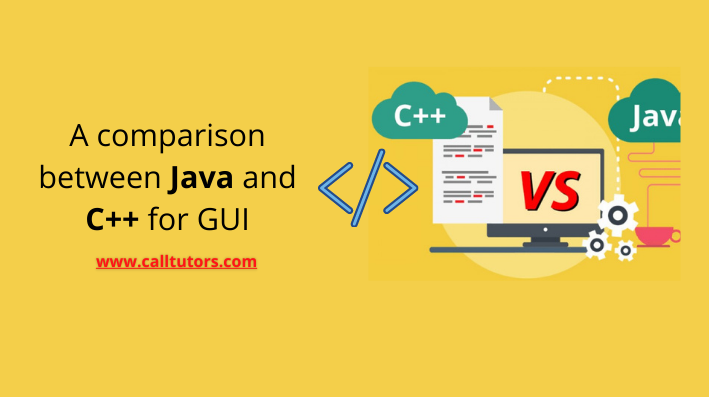 Graphical User Interface allows users to communicate to the computer program using the different symbols or graphical representations. When it comes to programming languages C++ and Java comes as two of the big names. Both the languages are vastly used for competitive coding. We see that mostly apps developed in GUI are with C++. C++ is widely used because of its efficiency, dynamics and high speed. While Java is same in the IT industry and when it comes to software development it is unbeatable by any other language. You will also get a java programming assignment.

Though both Java and C++ are languages that a beginner can start with and provide the fundamental base of programming for the future. This is why most schools who have the option of computer subject in their syllabus; teach C++ and Java so that students can get a better understanding of what actually programming is. Below I will be giving some points to compare both the C++ and Java for the GUI. Here I will be discussing the similarities and dissimilarities between the two, thus giving you a better understanding of which language to choose over others and why?

Both languages C++ and Java, have a wide area of application. Like C++ supports large developing softwares, and due to its fast execution, it is also used in game development. MYSQL is written with C++, google chrome, photoshop, file system, graphics are either scripted or written in C++ language. In contrast, Java has applications in mobile application development and Sim cards, network applications.

During the run time of the program in C++, the codes are executed by only a computer. The compiler compiles the running code into the machine code and thus becomes faster than Java. While in Java, the program file is first converted into the byte codes. Moreover, further interpreters convert it to the machine code. So as C++ is only compiled and Java is compiled and interpreted, making it usually slower than the earlier.

While C++ supports multiple arbitrary classes in a program, the Java programming language can drive from one class only. Also, the protected visibility is a little higher in Java than in C++.

While Java is a safe memory language, there are no issues like memory manipulation and memory loss. In comparison, C++ is not reliable regarding memory safety. Memory error may occur while executing the written program and may result in serious issues. However, there is the option of memory management in C++, which is a great advantage.

In a real-world application, C++ is for sure faster than Java. The reason may be lighter memory. However, Java programs are usually slower because they need to be interpreted, which is not done automatically in C++. However, if the developer does not optimize a C++ program, a Java program can run faster than C++.

C++ is the go-to language for graphics due to its compilation process, and yes also it easy to write and comes in handy. Also, cross-platform GUI libraries are available for C++, but they are not easy to operate and sometimes get rendered. While Java is cross-platform focused. However, Java lags due to its speed in a graphical coding environment. People also will tell you that Java GUIs are always ugly and do not fit the host system. Writing GUI in Java or C++ Programming Help entirely depends on the framework.

We already know that Java is a high-level language (HLL) while C++ is a low-level language. So while comparing the two for their closeness with the hardware, C++ is closer to hardware than Java.

It is incredible how more modern programming languages have adapted himself to suit evolving demands, including graphical interfaces. We have learned from this article that both C++ and Java are powerful languages. To have a solid understanding of computer programming, you should start studying all of them. However, if you choose to pick one of the two, ask yourself what kind of apps you want to create.